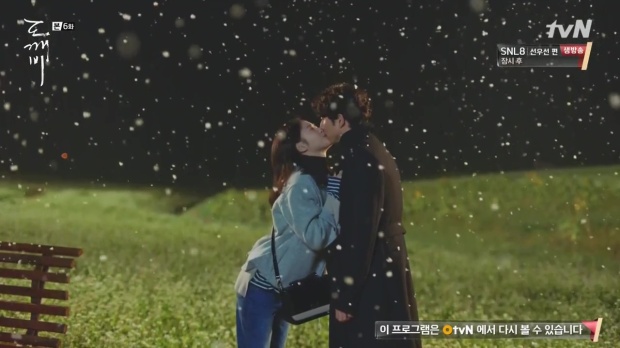 Zombie: Sooo… That was an interesting way to leave us hanging… The kiss was nothing special but the inability to draw the sword was a bit surprising. I guess you knew it wasn’t going to be easy but still… I didn’t expect her to not even be able to grab the thing.

Zombie: More awkward than anything. I don’t expect a 19 year old girl to land some passionate kiss on her first go and even Shin’s response is understandable it was not the kind of kiss I want in a show like this. But I know we still have a long way to go so maybe there’s hope of improvement before the end.

Raine: True. But like you said, more than that weirdo kiss…her not being able to grab the sword shocked the monkeys out of me! Do they both have to be passionately in love first or something?

Zombie: That’s what I’m guessing. I think Shin has to be truly, madly, deeply in love with her and she has to feel the same, if the sword is ever gonna come out. I don’t think the curse is going to let them get by with some whimpy kiss and a lot of confused emotions.

Raine: Definitely. A 900+ punishment from god means it needs a serious cure; really red-hot and involved love. Not just an early exploration and the first budding emotions.

Zombie: Nope, this curse is gonna hurt like heck when it breaks. That’s kind of the point of this punishment, isn’t it? To make Shin feel all the pain of every death he’s ever witnessed and/or been a part of… You don’t break that kind of curse without feeling it in your very core.

Raine: Yeah, and he won’t feel the severe loss of love at this point. Although he beginning to fight his death now that he has a budding reason to live. That and that bromance that just keeps getting better!

Zombie: I swear, Death and Goblin were made for each other. They’re just so perfect together. Though I have to say, I’m very much enjoying things now that Eun Tak has moved into the house with these two gods. Shin is way too cute, listening to her every move as she putters around her room and leaving her all those snacks… I know he was trying to bribe her into pulling out the sword before she was ready but still! He’s adorable in his doting. If that’s even the right word for this. Maybe bribing? Hustling? Smitten-ness? Oh whatever you call it, he’s cute and I love him.

Raine: Yes, it’s nice to see something fresh in his life after years and years and years of wandering solo. I think he was ready for the change since he saved Eun Tak’s mom because he made friends with Death before he really began to fall for Eun Tak. It’s like he primed himself for change. Which is great because he can now give the most awkward immortal-being-with-a-crush, Death, love advice. 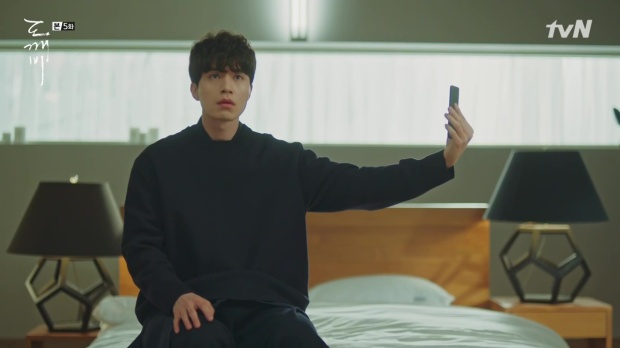 Zombie: Hahaha! I love that an immortal who’s been single for 900+ years is giving romantic advice to Death. They’re both so completely out of touch with humans they have no idea what it is they’re doing and yet, they try. Death is so darn cute, trying to figure out how to relate to humans. His quest for a name was hilarious and the whole lack of a job he can explain is killing him. Though I think Sunny’s sudden interest in Duk Hwa might actually kill him. For some reason, I don’t think Death would take a showdown with love rival very well. Especially not if he’s going up against someone like Duk Hwa. Pretty sure that kid wouldn’t stand a chance.

Raine: I know he wouldn’t, but I can’t help fall in love with Death being an awkward man-child when it comes to love. And Kim Woo-bin? That’s what you settled on? I’m sure even if you DON’T watch t.v. you’d see his name on the street somewhere. I’m dying here laughing just thinking about him. He needs to turn to Eun Tak more often. That pairing is just fabulous.

Zombie: OH GOSH, YES! Those two are almost as brilliant together as Death and Goblin! I love the way they can carry on whole conversations while Shin looks on in jealous confusion. It’s hilarious to me, the way a 900 year old goblin can’t keep up with a high school kid and Death.

Raine: It should be renamed “Immortal High School” because seriously, the way these boys are going through emotional puberty. 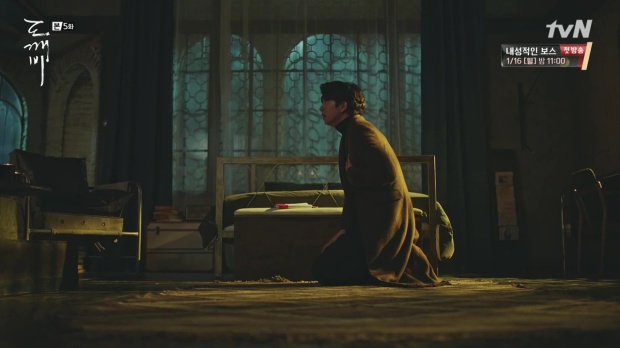 Zombie: HAHAHAHA! You’re so right! At least their awkward emotional awakening has been entertaining and you have to admit, there have been some very touching moments as well. I still can’t get over Shin, sitting in the park, in Canada, and the moment of realization he had there. Ack! I get goosebumps just thinking about it! Heck, even the way he’s been wavering between wanting to die and wanting to live gives me chills. The fact that he’s finally found something worth living for just kills me.

Raine: I love that Gong Yoo reflected the maturity of his years in that moment he fell in love. It’s new, yes, but you can feel this awakening in him. It’s pretty amazing.

Zombie: It was a beautiful moment and one I can’t stop swooning over. I really hope we’ll get more of those types of moments as the story progresses. Mostly because I love the way they remind you that Shin is so much more than just another pretty face. His story spans centuries and I like being reminded of that, from time to time. I like having a hero who’s existed for nearly a millennium and is still able to find the beauty in life, despite his curse. 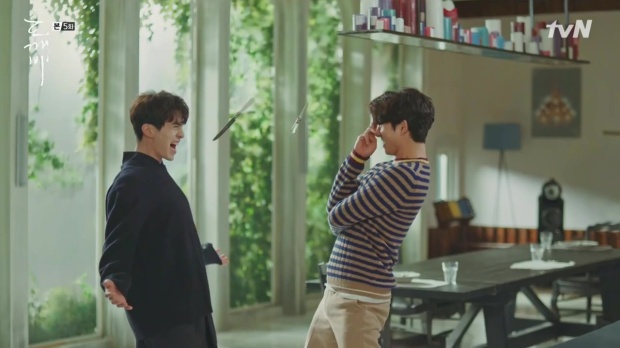 Raine: Exactly, my undead friend. These two episodes were less about plot and more about the small developments in character, the spurts of growth that Eun Tak and the other ‘youth’ around them teach them. And, for that matter, what Death and Shin teach each other. All while, y’know, mentally hurling forks and knives at each other. I really do think these two should be sent to immortal detention.

Zombie: Somehow I don’t think immortal detention would do either of them any good…

Raine: BWAHAHAHA! I just want this drama to go on forevers. Although, the thought of that sword there…I am a little puzzled by it still. He can pull it out to slice up cars and threaten with, but does it hurt? How does it get back in? I’m so confused.

Zombie: Maybe he has a spare sword that he uses for car slicing??? It just doesn’t seem possible for him to be able to draw the sword out of his chest whenever he needs it. That would seem to defeat the point of the curse. My theory is the sword lodged in his midsection is always there and the sword he uses for everyday life is something entirely different. After all, wouldn’t every ancient warrior worth his salt carry more than one weapon? What really confuses me is how Goblin can see into Eun Tak’s future but not see anyone around her. Is it because he doesn’t know who will be with her in the future or is it because she’s always been a mystery to him? Her abilities have always confused him so couldn’t this seeing into her future also confuse him?

Raine: I have faith the drama will address that since in episodes 5 and 6 Eun Tak did mention it to him and he was a bit confused as well. The story does seem to be systematically unfolding, which again, baffles me because this writer isn’t known for her logic.

Zombie: Well, there’s always a first time for everything, right?

Raine: Please, Madam Writer. Take us through to the end. With our Goblin and Death. Also, if we write anymore, I fear Zombie and I will spit out our entire lunches laughing at the antics of the show Goblin and our own…

Raine: *spits water all over screen*

Zombie: Clearly it’s time for us to end this and get back to our holiday shenanigans.

To hear more from Zombie and me, be sure to follow us on our blogs and/or social media:

The blog is going through some major revamping, so please excuse any issues in the near future.

Unauthorized use and/or duplication of this material without express and written permission from this blog’s author and/or owner is strictly prohibited. Excerpts, links and screencaps may be used, provided that full and clear credit is given to Raine and Raine's Dichotomy with appropriate and specific direction to the original content.

Thank you and have a nice day.

© Raine and Raine's Dichotomy, 2011-2017. Unauthorized use and/or duplication of this material without express and written permission from this blog’s author and/or owner is strictly prohibited. Excerpts, links and screencaps may be used, provided that full and clear credit is given to Raine and Raine's Dichotomy with appropriate and specific direction to the original content. Thank you and have a nice day.