I tried to resist. I really did. But once I discovered it, I became Pavlov’s dog. The trigger for my salivation?

It’s a seemingly innocuous little creature. It airs for an hour. It has beautiful people. It has a fanbase. All these describe many other kinds of t.v. worldwide. So what is it about the K-drama?

One blog I read says that it’s the “K-drama’s ability to show a grown man cry in a convincing manner” that captured her. It’s true. If you’ve seen Jang Geun Seok cry ( at 1:04) in You’re Beautiful after his mother rips his poor little heart to shreds, you’ll know what I mean.

But what is it for me? The pleasure of listening to and learning a new language and culture certainly is a draw. I have been notorious in my time for picking up multiple languages to study – Spanish, French, Welsh, Japanese, Italian, Portuguese, Hebrew and now, Korean. Is it the beautiful people? MOST CERTAINLY! As Girlfriday from dramabeans.com  says about My Girlfriend is a Gumiho, “show you complete me.” That is what I will say about one of  the most beautiful people in K-dramas, Park Shi-hoo. “Park Shi-hoo, you complete me.” 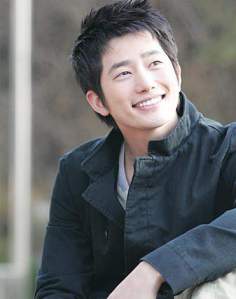 Park Shi-hoo. It’s the smile that does it EVERY time.

And have you seen the women? If anything could draw me to bat for the other team…

Son Ye-jin. The talented. The beautiful. Am I jealous? Oh hell yes.

ANYWHO! I enjoy the recipe’s for disaster that the K-drama tends to use. Many goals of shows seems to be trumping the recipes and trope’s and saying, “Haha. J/k. J/k.” A favorite observation of mine (that I read on the aforementioned dramabeans.com) was how My Name is Kim Samsoon took the piggyback trope and brought it back with a twist: Kim Sun-ah supposedly peeing on Hyun Bin’s back. Poor Binnie.

Kim Sun-ah atop Hyun Bin in “My name is Kim Sam Soon”. Did she pee on him? I sure as hell hope she did!

Also, I’m a fan of the shorter run times (12-30 episodes). If done correctly, you have an action packed show with twists, turns, gasps, and “oh-no-you-di’n’t”s that have you coming back every week for two more hits of crack. Because that’s what the K-drama is. Crack…of the legal variety. (Seriously, when City Hunter was airing, I nearly gave myself an aneurism waiting for the next episode.)

As I come up with more reasons (and when I have more time. I have to leave to teach a lesson in 2 minutes.), I will list them here. And feel free to list yours!

And now for some K-drama OST lovin’.

2 thoughts on “The Vortex that Is the K-drama”

The blog is going through some major revamping, so please excuse any issues in the near future.

Unauthorized use and/or duplication of this material without express and written permission from this blog’s author and/or owner is strictly prohibited. Excerpts, links and screencaps may be used, provided that full and clear credit is given to Raine and Raine's Dichotomy with appropriate and specific direction to the original content.

Thank you and have a nice day.

© Raine and Raine's Dichotomy, 2011-2017. Unauthorized use and/or duplication of this material without express and written permission from this blog’s author and/or owner is strictly prohibited. Excerpts, links and screencaps may be used, provided that full and clear credit is given to Raine and Raine's Dichotomy with appropriate and specific direction to the original content. Thank you and have a nice day.